Go to Shop
Full Jet crew has been busy preparing for the upcoming Double 11 shopping festival and its pivot toward fast GMV growth. Over 200,000 brands and 500 million users are expected…

Full Jet crew has been busy preparing for the upcoming Double 11 shopping festival and its pivot toward fast GMV growth. Over 200,000 brands and 500 million users are expected to participate in this year’s shopping extravaganza.

Also known as Single’s day, the November 11 began as a festival of young Chinese people celebrating their pride in singlehood and was soon promoted by Alibaba as a shopping day for the “lonely hearts” to pamper and indulge oneselves. This year marks the 11th consecutive year of Double 11 shopping spree since it was initially launched in 2009 and soon became the largest online shopping festival in China. In 2018.11.11, GMV of Alibaba Group totaled record one-day sales of 213.5 billion yuan and it only took shoppers on Alibaba’s Tmall 2 minutes and 5 seconds to rack up 10 billion yuan, breaking the previous year’s record of 3 minutes 1 seconds.

Any brands interested in participating this year’s Double 11 should have filed merchant application as early as September 12th and pre-sales products submission started at September 23rd. The pre-sale started at Oct 21st and warm up campaign shall start at November 1st. No less than 10% discount off the corresponding lowest regular pricing are required for all products submitted for Double 11 Festival. Besides the discounts, there are lot of other promotional offerings such as the pre-sale deposit expansion (double or more) and red packets.

For E-commerce operations companies, clock leading up to the final big day of Double 11 started counting down even weeks earlier before September. The E-commerce and marketing team of Full Jet have already put in numerous meeting sessions and practice simulations to plan for the inventory, drive traffic and get the backend and customer service ready to ensure the best result. We wish best success to all of our Brands. 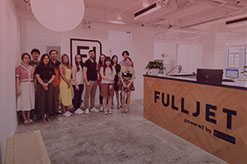 Last Monday was a moving day for all of the Full Jet powered by Baozun offices. In China and France, our teams are looking forward to working in a new…

Our China and Europe Offices Have Moved to Great New Locations!

Full Jet has resumed work on Februry 10th after the one-week extension of Chinese New Year holiday. Although some of our employees are still working from home either due to…

How is the Full Jet team handling the COVID-19 situation?