Go to Shop
The China Advertising Association has just released on July 1st a new set of regulations regarding Livestreaming/Online shopping or “Entertainmerce” as some like to call it. Another set of regulations…

The Impact & Implications of the New Regulations on Livestreaming in China

The China Advertising Association has just released on July 1st a new set of regulations regarding Livestreaming/Online shopping or “Entertainmerce” as some like to call it. Another set of regulations coming from the China General Chamber of Commerce, of which only a draft version is public yet, is meant to be officially published in the coming days or weeks. This comes in the wake of a general effort to clean up the wrongdoings of the advertising industry in China, notably, the faking of numbers (engagement, followers, sales etc) as we have mentioned in previous articles.

As is often the case in China, confronted with the booming new industry of livestreaming, the authorities have left it relatively unregulated at first, giving themselves the time to observe its development, in order to later regulate it in a way which they think is the most appropriate.

This also comes after numerous complaints from consumers. Following the Double 5 shopping festival in May, during which livestreamed retail initiatives recorded US $ 2O M in sales, the Shanghai Consumer Council alone received 2,617 complaints regarding Online shopping. Exaggerated product claims were the main sources of concern.

The China Consumers Association cited the case of Chinese actor Xie Mengwei, who pitched for an undisclosed online merchant on a live-streamed campaign in late April. Soon thereafter, many buyers complained about receiving fake or damaged goods. Realizing that he did not have enough of an understanding of the brand or the goods he was pitching, he later issued a formal apology, through the video-sharing platform Kuaishou.

Such complaints probably accelerated the regulators reaction, despite the fact that everybody agreed livestreaming activities had accelerated the recovery of the Chinese retail sector as the domestic economy was reopening in the aftermath of the coronavirus pandemic.

The main point from the text of the CCA which is already officially published are the following:

– The host of the program besides being 18 or older, should have a certification and should be trained by the organization employing him. He should identify himself with a real name, not a pseudo, and have consumed the product.

– The introduction of the product should be objective, professional, comprehensive and should not hide the weaknesses of the product.

– The origins of the product/service should be accurate

– Information about the product should not be exaggerated or even fake. The consumer shouldn’t be cheated or mislead.

– Stuffs or decorations that are not related to the livestream theme or product should be reduced or even removed.

The strange thing about those new regulations is that for the most part, they seemed to have already been included in the Advertising Law of the People’s Republic of China released in 2015. So why this new set of regulations?

The answer seems to be KOLs. KOLs in China are evolving in a grey area where they are not seen as being totally speaking in the name of the brand. As such consumers believe them more than they believe the brand itself. KOLs are supposed to advertise for brands which don’t necessarily pay them. This is what helps them become famous. But with fame some of them become 24/7 living billboards. Could these changes signal a shift in the way they are perceived?

With these new regulations, KOLs will be seen more and more for what they are: spokespeople of brands. Recent campaigns which have shed a light on their fake numbers have damaged their credibility in the eyes of brands. Will their credibility in the eyes of the public now also start to fade because of these new regulations? It is definitely a possibility. Will this force them to come back to what they were and alternate sponsored posts and genuine ones in order to regain some credibility. This seems to be the most probable short-term outcome.

Another interesting insight these laws underline is the difference between China and the West when it comes to the perception of the role of the individual, and the role of the authorities regarding advertising. In the West, we tend to think that we are protected by the fact that, as long as we know some content is advertising, we know it will always be, to some extent, exaggerated. Unless some content is outrageously lying or misleading, it is considered “ok.” Advertising and lying are intimately related in “our” minds. It is the consumers’ responsibility to make up his own mind about what advertising says. In China however, the authorities don’t feel the individual has this responsibility. On the opposite, they feel it is their duty to make sure he or she is fully protected by them. 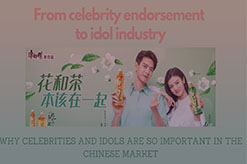 From Celebrity Endorsement to idol industry in China As we have said in a previous article, when brands come to China, they essentially make two mistakes: one is to think that the market being so big, even a…